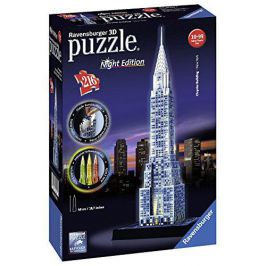 Be the first to review this product

Piece together this fantastic replica of the Chrysler Building at night, as darkness descends on New York City. Admire the smooth lighting in a variety of different colours as you puzzle the bright triangular windows to bring its pyramidal crown to life. With 216 pieces and plastic accessories, once complete the puzzle building measures 48cm in height. The Chrysler Building is one of the last skyscrapers built in the Art Deco Style, and was planned by the architect William Van Alen. At the time, Walter Chrysler, chairman of the Chrysler Corporation, intended to make the building into Chrysler’s headquarters.

Various architectural details were modeled after Chrysler automobiles. For example, the building’s gargoyles were modeled after the hood ornaments of the Plymouth, which exemplify the machine age in the 1920s.
For a short period of time the Chrysler Building was the tallest building in the world at 1,046 ft (319 m) before being surpassed by the Empire State Building in 1931.
It still remains the tallest brick building in the world, even though it contains an internal steel skeleton.